1. 2:54 by 2:54
2. An Awesome Wave by Alt-J (∆)
3. Django Django by Django Django
4. Devotion by Jessie Ware
5. Lonerism by Tame Impala
6. One Day I'm Going to Soar by Dexys
7. World, You Need A Change Of Mind by Kindness
8. The Bravest Man In The Universe by Bobby Womack
9. Shallow Bed by Dry The River
10. Kill For Love by Chromatics
11. Given To The Wild by The Maccabees
12. Sweet Heart Sweet Light by Spiritualized
13. Bloom by Beach House
14. Ester by Trailer Trash Tracys
15. Funtimes by The Heartbreaks
16. Nocturne by Wild Nothing
17. Lucifer by Peaking Lights
18. Standing At the Sky's Edge by Richard Hawley
19. Toy by Toy
20. Oshin by Diiv
21. Other People's Problems by Breton
22. Come Of Age by The Vaccines
23. We'll Be The Moon by Fixers
24. Beacon by Two Door Cinema Club
25. Evans The Death by Evans The Death
26. Europe by Allo Darlin'
27. Luxury Problems by Andy Stott
28. Visions by Grimes
29. Good Don't Sleep by Egyptian Hip Hop
30. Bloodstreams by DZ Deathrays
31. Rooms Filled With Light by Fanfarlo
32. Prince Fatty Presents "Hollie Cook In Dub" by Hollie Cook
33. Interstellar by Frankie Rose
34. Into The Diamond Sun by Stealing Sheep
35. ((0)) by Hey Sholay
36. Oui Oui Si Si Ja Ja Da Da by Madness
37. Confess by Twin Shadow
38. Play For Today by Ultrasound
39. Handwritten by The Gaslight Anthem
40. Our Nature by Savior Adore
41. Quarantine by Laurel Halo
42. This Is PiL by Public Image Limited
43. The North by Stars
44. The Only Place by Best Coast
45. The Orbserver In The Star House by The Orb & Lee Scratch Perry
46. Melody's Echo Chamber by Melody's Echo Chamber
47. Tiger Talk by Yukon Blonde
48. Be Strong by The 2 Bears
49. Shrines by Purity Ring
50. Maurice Narcisse by Eula

A few more lists to follow tomorrow.
HAPPY NEW YEAR everyone! Be safe and happy.
Posted by Cowboys And Indies Radio Program at 9:45 PM No comments:

The moment you have been waiting a year for. The 2012 Festive 50 countdown.
Yes, we named after it our idol John Peel's yearly countdown. Where John featured specific songs we concentrate on the artists and their year long output. So ours is all about the artists. We are paying tribute by using samples of John from various old broadcasts introducing the placings. This is only part 1 of 2 featuring #50-26.
So make sure you tune in next week to hear part 2 and to see who is #1 for 2012!

Some new material was still being released right through the holiday. Two new tracks (well..older demos but still new to us) from Pulp and Wild Beasts were dropped on Christmas day. Plus we have time for some other tracks that never received airplay. So we open with the brilliant new track from Pulp. 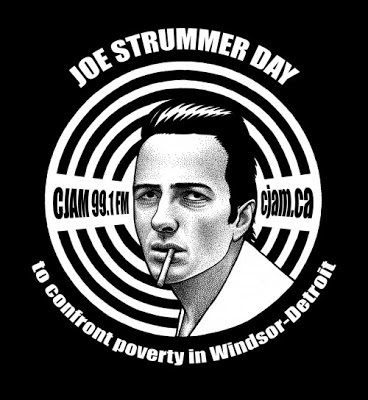 Strummerville Foundation – Cowboys & Indies Special 10:00PM – 12:30AM
Marc Cazabon officially closes out the day’s festivities with a look at the Strummerville Foundation: outlining their work and how they help indie bands. The Cowboys and Indies host will feature bands that have and are currently being helped through the works of the foundation. Also, he’ll take a look at the overseas charity work, like the founding of their music schools in Malawi & Sierra Leone.

Last regular show of the year! Next week we are proud to be part of the 3rd annual Joe Strummer Day. Cowboys & Indies will profile Strummerville and the foundations work supporting indie artists in the UK and the world.
The two weeks after that will be the annual Festive 50 countdown. Where we count back the top 50 artists of the year.

born blonde - radio bliss
by the sea - waltz away
-----
the courteeners - lose control
everything everything - kemosabe
blur - under the westway
massive attack - be thankful for what you've got
-----
ian skelly - caterpillar
esben & the witch - deathwaltz
peace - wraith
jake bugg - someone told me
-----
paloma faith - just be
the associates - heart of glass
nadine shah - are you with me?
-----
lp session - breathless "green to blue"
breathless - it's good to see you
breathless - rain down now
breathless - the same room without you
-----
two wounded birds - if only we remain
2:54 - creeping
cast of cheers - trucks at night
sisters of mercy - amphetamine logic
adam ant - gun in your pocket
-----
manic street preachers - motorcycle emptiness
biffy clyro - black chandelier
glass caves - eboracum
beak> - mono
katy b - danger w/ jacques greene
-----
paul weller - dragonfly
viv albertine - in vitro
cornershop - non-stop radio feat. celeste
-----
the birthday suit - uh-huh uh-huh
the co co colaz - round & round
Posted by Cowboys And Indies Radio Program at 10:13 PM No comments:

Better late than never seems to be the theme for tonight's show. We have a couple releases that are new to us over here in North America but are 2 years old each in their native UK. It appears that the Fuzzbox cover of Pop Muzik is from 2010 released during their reunion concerts. The Mutineers album in the LP session was released at least 1-2 years ago but has finally made it over to us via digital download.
Does it actually feel like 32 years ago? Today is the anniversary of John Lennon's assassination. So we featured a couple of John's tracks and some covers as well. Including, the brilliant cover of Jealous Guy by Roxy Music.
Only one regular show remains in 2012. Special shows will end this year and start the next. Cowboys & Indies is part of Joe Strummer Day festivities this year. Then after that The Festive 50 countdown will end the year with a bang!
After all doesn't everybody love year end lists? Working on mine now. What are yours? Let me know via the comments.

Posted by Cowboys And Indies Radio Program at 10:51 PM No comments:

These Days I Dream Of Pyramids! Show tracks for Sat. Dec. 1/12

If you read last weeks entry you know The Who was in town performing Quadrophenia. So we open the show with a couple tracks from their classic rock opera. Just as an aside, the remaster sounds light years better than the original. Do yourself a favour and snatch this one up.
The mind was working a little better this week and I actually remembered to play the tracks I intended to play. For a December there is still quite a bit of new material available. That plus 2 LP Sessions from a former Gene member and Born Blonde. Plus for good measure a set of Motown covers.

The Best Of The British Indie/Alternative Scene

Compiled from playlists, listener requests and dj input for November 2012
Posted by Cowboys And Indies Radio Program at 10:52 AM No comments: